What is the Joint Probate Exception in Idaho? 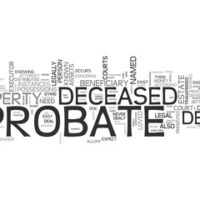 Probate can extend past the three-year rule under the joint probate exception, a law in Idaho that extends probate due to a deceased spouse.

People tend to assume that the process of doling out property following a death is automatic.  Surviving spouses, in particular, assume that the estate of the deceased will automatically transfer to them as a matter of law.  This is not the case.  A deceased spouse is free to leave their property to anyone they wish, such as children, other families, friends, charities, etc.  If they have a valid last will and testament, that will govern the distribution of their assets.

However, in order for the will to govern, someone must institute a probate process within three years following the death.  If no one institutes the probate process within three years, then the will may not be considered valid and instead, the property will be distributed by operation of statute; typically, some combination of distribution to surviving spouses and children.  Creditors are also subject to the three-year statute of limitations:  If a creditor fails to make a claim within three years, they lose out on their chance to collect from the estate.

There is an exception to the three-year rule in Idaho.  The Idaho Supreme Court discussed the exception in a recent case entitled In the Matter of the Estate of Robert Ernest Melton and Hedwig “Hedy” Melton.  The case involved a creditor who sought to collect from the estate of Hedy, who died in 2008, more than three years after she passed.  Hedy’s will was never probated.  Her surviving husband, Robert, died in 2013.  A probate was then filed for Robert which included Hedy as a joint probate.  The creditor filed a creditor claim against the estate for money owed on a loan; Hedy’s estate argued that only Hedy had signed on to the original loan and that more than three years had passed since her death, preventing the creditor from bringing a claim.

In evaluating the creditor’s claim, the Idaho Supreme Court discussed Idaho Code section 15-3-111, which sets forth the requirements for joint probate.  The section applies when:  (1) one spouse dies; (2) the surviving spouse was entitled to all of the deceased’s property by will or law; and (3) the surviving spouse then dies before any probate proceedings had begun on the first spouse’s estate.  If those conditions apply, then the estates of the two deceased spouses can be joined in a single, joint probate proceeding.  The three year statute of limitation starts only after the second spouse dies, and nothing in the statute states that the second spouse has to die within three years of the first for the provision to apply.

The Idaho Court, however, ruled that the section did not extend the creditor’s timeframe with the joint probate exception to pursue claims directly against Hedy’s estate.  The Court held the claims against Hedy’s sole estate were time-barred, but any surviving claims against Robert’s estate were permissible.  The result of the case is a bit counter-intuitive, but the opinion does help to illustrate that the joint probate exception can be helpful for families to preserve the ability to probate for a longer period of time, allowing for a better plan of distribution.

If you’re ready to create a will, or you need any further advice regarding the joint probate exception, please contact Canyon River Law in Twin Falls, Idaho. You’ll feel proud and empowered taking this important step to protect your legacy and your family’s future.

By Canyon River Law | Posted on December 30, 2018
What Our Clients Have To Say About Us View Our Testimonials